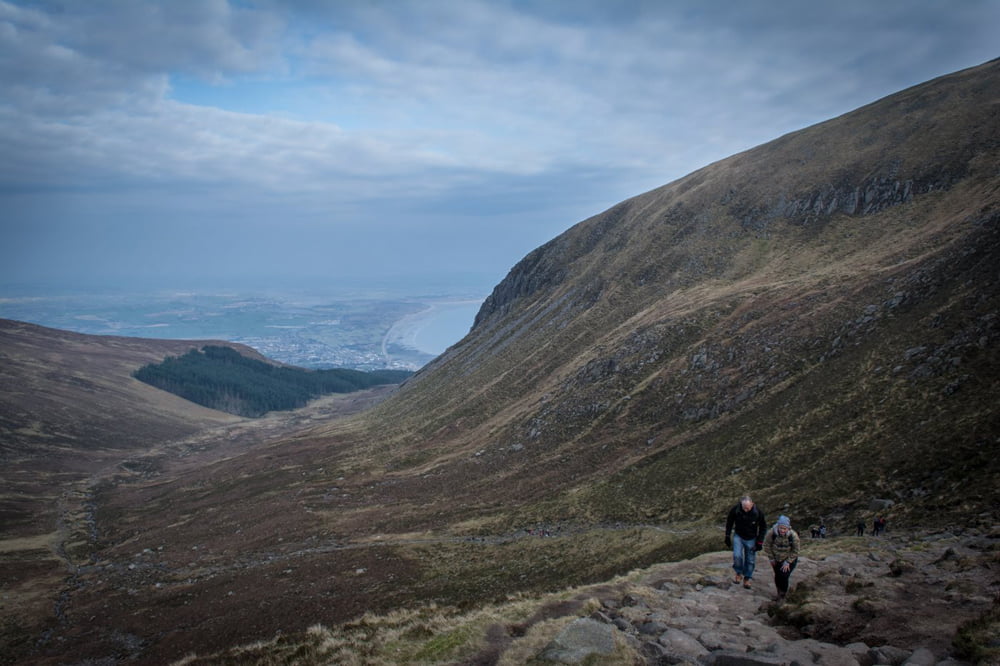 Quite a while ago, whilst sitting in our Camper Van at Donard carpark in Newcastle Co Down, Alan suggested that we walk through Donard Forest and up into the Mourne Mountains. At the time, for various reasons, the main one being primarily that I was very lazy and couldn’t see how walking that far could constitute any type of fun, I declined.

Fast forward at least ten years, to late January 2017, here I was sitting having coffee just before embarking on my first ever climb up a mountain. That mountain being Slieve Donard and we were going to start the climb through Donard Forest.

Just 24 hours earlier I happened to mention the time we had spoken about going up into the Mournes and one thing lead to another, and here we were with Alan’s brother Phillip.

Myself and Phillip in Donard Carpark pic by Alan Fitzpatrick

Waiting by the gate

As I had never climbed up anything before, I will say I was quite apprehensive, not also to mention badly kitted out for the journey, as I have mentioned before, lesson number one Docs and jeans are not appropriate ‘walking up anything’ gear.

To be honest, even though it was late January and the sky was grey with a chill in the air, it turned out to be the best weather we have had so far, since then.

The first part of the walk, through the forest, I loved, even if it was a bit steeper that I was used to. I am very partial to trees, so anywhere I am near them makes me a happy camper.

Then came the second bit, where we left the forest behind and walked through a valley, it was only then I copped that the curvy section just to my left, where all the people were walking up was our actual intended destination.

My Docs pic by Alan Fitzpatrick

This would bring us up to the Saddle, which is the section between the two mountain peaks and the one disappearing into the sky was Slieve Donard.

Needless to say, my not so great love of heights, my sore legs, walking on the flat and up a mountain cannot be compared, and my slightly cranky humour ground me to a halt.

Myself and Alan climbing to the Saddle pic by Phillip Fitzpatrick

Ten minutes of negotiations later Alan had managed to convince me to just go as far as the Saddle. So I did – where I was kind of happy and kind of not happy.

Phillip and myself arriving at the Saddle pic by Alan Fitzpatrick

View of Newcastle from the Saddle

I changed my shoes, ate a bit and looked up at both of the mountain peaks before I waddled back down again.

View up Slieve Donard from the Saddle

Climbing back down from the Saddle pic Alan Fitzpatrick

I can definitely say my first experience was not as I thought it would be and very physically different than I expected it to be. But I had made it to the Saddle, the highest I had ever been up something, so it was a start, and now I could reference how long it would take to walk there.

Between our 1st and 2nd (almost) walks up Slieve Donard we climbed Slieve Binnian read about that here.

For my 2nd attempt at getting to the top of Slieve Donard, we were advanced prepared; I had the walking boots and trousers, backpack and lunch, we even had rain gear, just in case.

Well, there was no ‘just in case’ about it, the first part, again in the forest started off really well, with only a 30% chance of rain, it was grey and overcast but nice.

A wet and misty Saddle in the distance

2/3 of the way up it started to drizzle, then the drizzle turned into a shower, the shower into buckets and by the time we left the forest behind it was a full blown gale, where I was bending over to try and stand up straight.

Myself and Alan very wet

Donard attempt number 2 ended in the valley, this time I didn’t even get to the Saddle.

Not one to give up, I muttered to myself all the way down, “next time”.

Related Posts From The Blog

Campervan Conversion Alice, yep we finally named our campervan, only a year after buying her as a nine-seater minibus. Officially she is a Vauxhall Vivaro, and we finished the final conversion to a camper a week ago. Last year we did a temporary conversion to see what...

END_OF_DOCUMENT_TOKEN_TO_BE_REPLACED

Knockma Forest Trail Hi, and welcome back to another weekly post here on A Wandering Hippy. This time I am revisiting one of our most recent trips to the Knockma Forest Trail, which we did in February. Knockma is approximately a thirty-five-minute drive from Galway,...

END_OF_DOCUMENT_TOKEN_TO_BE_REPLACED

Hi, and welcome back to my weekly blog post. This week I am revisiting a trip we took to Keem Bay in Achill during one of the periods between lockdowns in Ireland last year. Having visited many occasions, I had always wanted to hike up to the derelict lookout post on...

This website uses cookies to improve your experience while you navigate through the website. Out of these, the cookies that are categorized as necessary are stored on your browser as they are essential for the working of basic functionalities of the website. We also use third-party cookies that help us analyze and understand how you use this website. These cookies will be stored in your browser only with your consent. You also have the option to opt-out of these cookies. But opting out of some of these cookies may affect your browsing experience.
Necessary Always Enabled
Necessary cookies are absolutely essential for the website to function properly. These cookies ensure basic functionalities and security features of the website, anonymously.
Functional
Functional cookies help to perform certain functionalities like sharing the content of the website on social media platforms, collect feedbacks, and other third-party features.
Performance
Performance cookies are used to understand and analyze the key performance indexes of the website which helps in delivering a better user experience for the visitors.
Analytics
Analytical cookies are used to understand how visitors interact with the website. These cookies help provide information on metrics the number of visitors, bounce rate, traffic source, etc.
Advertisement
Advertisement cookies are used to provide visitors with relevant ads and marketing campaigns. These cookies track visitors across websites and collect information to provide customized ads.
Others
Other uncategorized cookies are those that are being analyzed and have not been classified into a category as yet.
SAVE & ACCEPT